New to Twitter? Don’t even know what it is? well then this post is for you. Well lets start with what it is, it’s mainly a way to stay connected with friends through bit sized messages 140 characters long. There are many ways to tell twitter what you’re doing and to see what your friends are doing, including through your phone, desktop apps, and of course the site itself.First you’ll need to sign up ( twitter.com/signup ) if you are not a user of the site yet. Registering only takes a few things, your name, username, emai, and password. You can change any of these at anytime while using the site but I suggest sticking with 1 username. 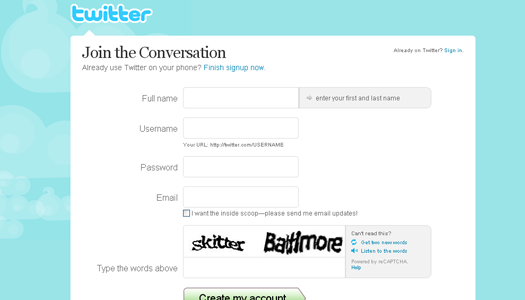 The reason to stay with 1 username is due to the fact that people often will respond to you. Responding to you requires users to use an @ symbol then your username, and if that name changes a lot of replies will get lost in the transition. Once signed up you will be greeted with the site’s homepage asking “What are you doing?” which is the whole site in 4 words. For example my first “tweet” was “im making a twitter account“, twitter can be used for anything, you could talk about a cool site you found, what your thinking, or anything that’s 140 characters and worth reading. If you signed up hopefully you knew someone on the site before signing up (if not you can follow me 😀 ) note that you can use Twitter’s find people function also, but I really don’t reccommend it.

The follow button is always under the profile picture, by following someone you will recieve all of their updates on your homepage.  Say someone posts something you like and you want to respond, you can do this by using an @ symbol then their user name (@username) followed by your comment, and they will be notified of the response. If you liked someone’s post you can “ReTweet” it which isn’t a actual feature of the site but it is well know, this is done by saying “RT @username (their original post)” so you include RT, their @username and their original post, basically giving them credit. A lot of these features can be done though programs off of the site, some of these include Tweed Deck, Twhirl, and plenty of others. You can also use Twitter on your phone, by going to device settings. Txting to Twitter (which is 40404) updates your status with whatever you text to it, many of the features on the site can be done though text commands which are found here. That sums up Twitter, there are literally hundreds of sites that use it’s features, but it all comes down to what you’re doing. If you have any questions about twitter just reply to @someguy9 with any questions.